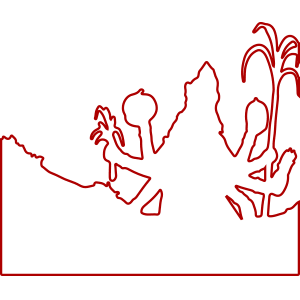 Who is Goddess Shakambhari?

Goddess Shakambhari is the incarnation of Goddess Bhagwati. She is also called "The Bearer of the Greens”. According to the scriptures and Hindu mythology, all the vegetarian food products are regarded as the prasad or sacred offerings of Shakambhari Devi.

What is The Legend or Story of Shakambhari Mata?

According to the holy scripture of Hinduism, Devi Bhagavatam, the story of Shakambari Devi states that once there was a demon named Durgam who acquired all the four Vedas by practicing great hardships and penance. He also gained the boon that all prayers and worships presented to the deities will be reached to him and thus Durgam became indestructible. After acquiring such powers, he started troubling everyone which resulted in the loss of Dharma and hence there were no rains for hundreds of years which caused conditions of severe drought.

All the sages, munis and rishis were hidden in the Himalayan caves and performed continuous Yagas and Tapas to seek the help of Mother Goddess. Hearing to their hardships and cries, Mother Goddess incarnated as Goddess Shakambhari bearing grains, fruits, herbs, pulses, vegetables, and greens. The term Shaak denotes vegetables and thus the Goddess was famous by the name Shakambari Devi. Seeing the plight of the people, tears rolled down from the eyes of Goddess Shakambhari for 9 days and nights continuously. Thus, the tears transformed into a river and there was an end to the condition of drought.

Also See: What is the Astrological Significance of Paush Amavasya

The Goddess also fought against Durgam in order to save humans and the rishis from the cruelty of the demon. Goddess Shakambhari manifested 10 powers within her and with all her powers killed Durgam. She returned back all the Vedas to the sages and was also named Durga as she killed the demon Durgam. Since that time devotees observe a fast of Shakambari Purnima or in order to get blessed with the blessings of the Goddess and usher in prosperity in their homes.

What is The Importance of Shakambari Purnima?

There is a huge significance of Shakambari Purnima as it is also the birth anniversary of Shakambhari Devi. At various places in India, the day is celebrated as Paush Purnima which is considered as a highly important day as per the Hindu calendar. The ISKON followers or the Vaishnava Sampradaya begin this day with the Pushya Abhishek Yatra as it is the start of Magha which is a month of religious austerity as per Hindu calendar. If people perform sacred bath on this special day then they attain Moksha as well as they can also yield huge merits by making donations on the day of Shakambari Purnima.

What To Do On Shakambari Purnima?

Goddess Shakambari is regarded as the benign form of Goddess Durga who is extremely kind, compassionate and affectionate. On this day, people must worship and offer prayers to Shakambari Devi, make donations, perform charities, observe a fast, go on pilgrimage, undertake holy bath and must do good deeds to attain the divine blessings of the Goddess.

To know about the various auspicious days and dates of this year, Click here!