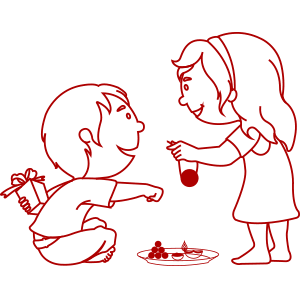 Why do we celebrate rakshabandhan? Story of Raksha bandhan festival.

Raksha Bandhan, a colorful Indian festival that is eagerly awaited by all sisters and brothers in Hindu families is around the corner. Rakhi, as it is also known, is the celebration of the special bond a brother and sister share. This Hindu Festival is celebrated with much joy and happiness on Purnima, the last day of the holy month of Shravan.

Rakhi shubh muhurat for this year.

As per 2023 Hindu Panchang, Raksha Bandhan Date 2023 falls on the Purnima tithi in Shravan month.

What is Raksha Bandhan Shubh Muhurat?

The rituals of Rakhi should always be performed during the auspicious times of the day. Aparahna is considered the perfect time to observe all the traditions of this festival. The time of Bhadra should be strictly avoided as it is malefic and not considered viable for any auspicious work. One should always check Shubh Muhurat and Choghadiya of the day before beginning any important ritual.

Learn How to make Designer Rakhi at Home.

How is Raksha Bandhan Celebrated?

There are many legends and stories associated with the festival of Rakhi which add to its significance in Hindu religion. Some of these stories are :

Yama, God of Death, visited his sister Goddess Yamuna after 12 long years. She was elated and prepared a lavish feast for his brother comprising of all his favorite dishes. When he came to visit her, she welcomed him with tilak and tied a thread on his hand. Yama was moved by this gesture and asked Yamuna about the gift she wants. On which, she asked him to visit her regularly. Yama, then blessed her with immortality and promised to protect her from any difficulty.

On the day of Makar Sankranti, Lord Krishna cut his finger. Draupadi, on seeing it, immediately tied a cloth from her Saree on his finger. Lord Krishna, then promised to protect her in every challenging and difficult time. This promise, he fulfilled at the time of her cheer haran, by extending her Saree and protecting her from Kauravas.

King Bali was an ardent devotee of Lord Vishnu. One day he prayed to Vishnu for protection. Lord Vishnu, pleased with his devotion, fulfilled his prayer by disguising as his doorman. Goddess Lakshmi missed Lord Vishnu in Vaikuntha. So, she disguised herself as a homeless woman and sought shelter in Bali’s kingdom. Lord Bali, being one of the kindest rulers, welcomed her and gave her shelter and in turn, his kingdom prospered. On Shravana Purnima, Goddess Lakshmi tied a sacred thread on Bali’s wrist for his protection. Lord Bali then asked her about what gift she wants on which she pointed towards the doorman. Then, Lord Vishnu revealed his identity. Bali requested Lord Vishnu and Goddess Lakshmi to go back to their abode. But, knowing Bali’s devotion, Lord Vishnu promised to spend 4 months in Bali’s kingdom.

Raksha Bandhan is one festival that is celebrated across India. People sing Raksha Bandhan songs, prepare delicious sweets, come together, exchange Raksha Bandhan wishes and make it an occasion that is packed with vibrancy, happiness, jubilation and exuberance. mPanchang wishes you all a Happy Rakhi!

1. Can we tie Rakhi to sister?

Rakhi sister is said to be a sister from another mother. They need not be your blood relative. They can be your friend and acquaintance.

3. What should I give my sister on Rakhi?

You may give any gift to your sister as per their wish or your budget. You may choose Rakhi gifts for sisters from the above mentioned Rakhi gifts ideas.

4. Why do sisters tie Rakhi?

Rakhi holds the prayers of longevity, prosperity and happiness. Sister tie Rakhi to their brother for their happiness and long life. By tieing the love thread they ask their brother a promise to protect them from all the difficulties, sorrows and negativity throughout their life.

5. When we should Remove Rakhi?

As per Hindu tradition, Rakhi can be removed after eight days of Raksha Bandhan, that is on the occasion of Krishna Janmashtami. In Maharashtrian traditions, Rakhi is removed on the 15th day from Rakhsha Bandhan on Pola festival. On this day, people worship God Marbot Dev and remove Rakhi by throwing it upon the Toran. However, brothers can wear Rakhi as long as they want. The only thing one should remember is to dispose of Rakhi carefully if it is torn or broken.

6. How do I safely dispose off a Rakhi after Raksha Bandhan?

Rakhi should not be thrown anywhere. It is a sacred thread and thus one should dispose of Rakhi in a sacred river or lake or pond. If there is no scared river or pond nearby then Rakhi should be disposed of under earth.

7. What should we do on Rakhi?

On Raksha Bandhan festival, members of the family tend to get up early, take a bath and wear new clothes. Then, the brothers and sisters should perform Rakhi rituals at Rakhi Shubh Muhurat.To perform Rakhi rituals, sisters should light a diya, prepare a Rakhi thali or aarti thali. Then, they should tie a Rakhi on the brother’s wrist, apply a tilak on their forehead. Later, sisters feed brothers with sweets. In return brothers give Rakhi gifts to their sisters.

8. Are rakhis tied only to family members?

No, Rakhi can be tied to anyone you treat as brothers or siblings. You may tie Rakhi to your neighbours, friends or sister-in laws. Nowadays people also tie Rakhi to policemen, priests and people they respect. For a long time, people used to tie to God idols and pray for the happiness and prosperity of their families.

9. On which hand Rakhi should be tied?

10. Which God is Worshipped on Raksha Bandhan?

On Rakhi, God Indra and God Varuna are mainly worshipped. One may also worship the deity they believe in.
See more Raksha Bandhan Photo for status.