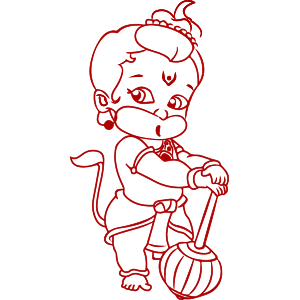 Hanuman Jayanti 2023 celebrates the birth of Lord Hanuman, who is believed to put an end to the miseries and hardships of his followers. The hero of the epic Ramayana, Hanuman, also known as Bajrangbali and Pavanaputra, is remembered for his ardent devotion to Lord Rama. According to the Hindu calendar 2023, Hanuman Jayanti falls in the month of Chaitra (March-April as per the Gregorian calendar). Read Hanuman Chalisa to gain strength during the difficult time!

Why is Hanuman Jayanti celebrated

The very image of vitality, Lord Hanuman is said to have the capacity to assume any frame voluntarily, use rocks, move mountains, dash through the air, and rivals Garuda in quickness of flight. He is revered as a deity with supernatural forces and has the capacity to vanquish malicious spirits. Hanuman, who helped Lord Rama in his quest to eliminate evil forces, is amongst the most popular deities in Hindu religion. He is said to be an incarnation or avatar of Lord Shiva and represents strength, determination and loyalty.

Punjikasthala, the attendant of Vrihaspati, the gurus of devtas, was cursed to be born in the form of a female monkey. To escape the curse, she was to give birth to an incarnation of Lord Shiva. Born as Anjana, the apsara undertook a vigorous penance to please Lord Shiva. Impressed by her devotion, Shiva granted her the boon.

Meanwhile, the king of Ayodhya, Dashrath was performing a yagna to seek divine children. The God of fire, Agni blessed King Dashrath with a bowl of sacred dessert as prasad . While Dashrath’s wives consumed the prasad, a kite snatched part of the desert and dropped it where Anjana was meditating. The wind god, Pavana, carried the prasad into her hands. Anjana gave birth to Lord Hanuman after consuming the divine prasad. As an incarnation of Lord Shiva, Lord Hanuman is also known as Rudra Avatar. With Pavana as his godfather, he is known as Pavanaputra.

Anjana gave birth to Lord Hanuman on the full moon day of the Hindu month of Chaitra. Devotees throng Hanuman temples and offer prayers on this day to instil positivity in their life and to get rid of evil powers and spirits.

Every year, Hanuman Jayanti is celebrated on the full moon day of Chaitra (Chaitra Purnima). Since Lord Hanuman is believed to have taken birth at sunrise, thus, celebrations in Hanuman temples start before sunrise and continue for the entire day, until after sunset.

See the upcoming festivals in 2023.

What We Can Learn from Lord Hanuman

Lord Hanuman is the symbol of loyalty and devotion. He possesses unmatched strength and great intellect. He teaches us devotion; how to master the five senses of smell, taste, sight, touch and hearing; how to be faithful; humility with power; helping those in distress; overcoming difficulties of life.

Lord Hanuman also signifies integrity, valor, intelligence, strength, patience and wisdom. He is supreme among the wise, touted as ‘bhudhimatam varishtham’. The character of Hanuman shows us of the boundless power that is unused inside every single one of us. Hanuman coordinated each one of his energies towards the love of Lord Rama, the undying commitment making him free of all physical exhaustion. Hanuman superbly embodies ‘Dasya bhava,’ considering himself a ‘humble servant’ of Lord Rama. Thus, it is rightly said that to reach Lord Rama, one has to go through Lord Hanuman.