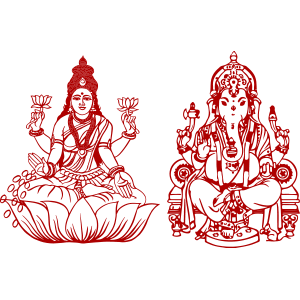 2022 Dhanteras marks the beginning of the festival of lights Diwali. It is also termed as Dhana Trayodashi or Dhanvantari Trayodashi with “Dhana” meaning money and “Teras” or "Trayodashi" meaning thirteen, as is celebrated on the thirteenth day of the Kartik month. Hindus, across India, devotedly worship Goddess Lakshmi for wealth, prosperity, opulence and happiness on this day. Traditionally, Lord Dhanvantri, the originator of Ayurveda and the physician of Gods, was worshipped on Dhantrayodashi for good health and well being but now it has become a celebration of wealth and prosperity.

Dhanteras is regarded as one of the most auspicious days in Hindu calendar and is sometimes even referred as the festival of wealth. On this day, people buy gold, silver and other precious ornaments as a symbol of bringing Lakshmi home. It is believed that on Dhanteras, the oceans were churned for "Amrita" or nectar and Goddess Lakshmi and Lord Dhanvantri came out of that milk of ocean carrying the pot of Elixir meant for a long and healthy life.

There is another legend associated with Dhanteras Puja 2022 - the legend of King Himas 16 year old son. According to his horoscope, his death was prophesied by a snake bite on the fourth day of his marriage. On the said day, his wife laid out all her sparkling jewelry, gold and silver coins and other ornaments in the form of a heap at the entrance door of their sleeping chamber and lit up her room with earthen lamps or "diyas" to prevent her husband from sleeping. She also sang songs and narrated stories to her husband and kept him awake all night to avoid the snake bite. When “Yama” arrived at their entrance in the form of a serpent, he was bedazzled by the lights and sparkle of the ornaments placed at the doorstep and went back the next morning after listening to the songs and stories. The princes life was saved by his wife and this is why this day is then celebrated as Dhanteras. Also, the next day is celebrated as “Yamadeepdan” or "Narak Chaturdashi" where the women of the house light up "diyas" in every corner of the house and keep them burning throughout the night as a symbol of paying respect to Lord Yama, the god of death and praying for a happy, healthy and a prosperous life for their husband and family. This day is also known as "Choti Diwali" in various parts of the country.

How to Celebrate Dhanteras 2022?

2022 Dhanteras is celebrated with immense enthusiasm and gusto in India. Despite being a Hindu festival, it is celebrated with similar zeal by other sections of the society, as well. On this day, shopping of jewelry or coins of gold or silver and utensils is regarded as extremely auspicious as it is considered as bringing “Goddess Lakshmi” home. Also, it is believed that purchase of any kind of "metal" on Dhantrayodashi is a symbol of good luck. On Dhanteras, people buy new clothes, clean their homes, offices and bedeck them with lamps, lanterns, rangoli, diyas and footprints of Goddess Lakshmi. “Lakshmi Puja” or "Dhanteras Puja" is performed in the evening in which earthen lamps are lit to ward off the negative vibes and evil spirits from ones home and office. The Puja is followed by singing of "bhajans" and other devotional songs and hymns for Goddess Lakshmi. "Naivedya", a sweet made from Jaggery and coriander seeds is offered to Goddess Lakshmi in Maharashtra while in other parts of India traditional sweets are offered. In villages, people often worship their cattle on this day as they are the prominent source of their income.