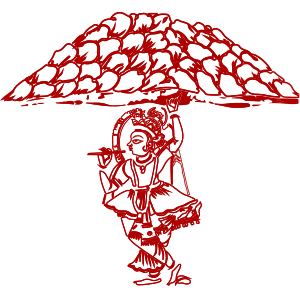 What is Govardhan Puja?

Deepavali is one of the biggest and most joyously celebrated Hindu festival; it is a 5 day celebration with each day holding its own importance. Govardhan pooja or Annakut puja, as it is popularly known, occurs a day after Diwali and is celebrated with great vigor in major parts of India. While the first three days of the 5 day festivity are about praying for wealth, prosperity and well being, the fourth day or Govardhan Pooja is about thanking our deities for their blessings and beneficence.

When is Govardhan Puja?

As per the Hindu Calendar, Govardhan Puja falls on 'Ekam' or the first lunar day of Shukla Paksha in Kartik month and forms a prominent part of Hindu festivities.

Why is Govardhan Puja celebrated?

As the legend has it, people of Vrindavan worshipped Lord Indra in the rainy season for a bountiful harvest. Lord Krishna taught everyone in his village the importance of preserving nature for abundant rainfall and fought against Lord Indra who brought heavy rains to the village and sheltered everyone under the mighty Goverdhan mountain. So, the significance of Govardhan puja also rests on the belief of the devotees on their deity and how God will protect them against all odds and in every circumstance.

In Gujarat, this day calls for the celebration of Gujarati New Year whereas in Maharashtra, Govardhan Pooja is celebrated as 'Bali Padva' or 'Bali Pratipada'. Legends suggest that Vamana, an incarnation of Lord Vishnu defeated Bali and pushed him to 'Patala Loka', so it is believed that King Bali visits the earth on this day. This festival is also celebrated as 'Vishwakarma Day' in many parts of the country where people worship their tools and equipments.

How to do Govardhan Puja Vidhi?

Govardhan pooja celebrations are associated with several rituals and traditions.

How is Govardhan Puja Celebrated?

Govardhan Puja is celebrated with utmost devotion in Mathura and Gokul. 'Govardhan Parvat', the pilgrimage site in Braj is visited by thousands of devotees where they offer food to the mountain after doing the 'Parikrama ' of an eleven mile path around the mountain and offering flowers to the several shrines situated there.

Annakut, as its name suggests, means mountain of food. Its preparation forms an integral part of Govardhan celebrations.

The temples of Lord Krishna all across the country are decorated and this festival is celebrated with Bhajan recitals, dance and sweet distributions and Govardhan wishes to family and loved ones.

'Thaal' or 'Kirtans' is another important aspect of Govardhan Pooja celebrations. These devotional hymns are recited by the priests and the devotees at all the temples of Lord Krishna.