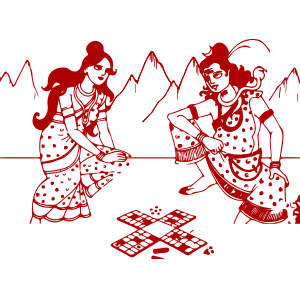 It is known that the act of gambling is during Diwali time is one of the most popular act since the Vedic period. However, during that time it was known as Dyuta Krida or Dyuta.

This game is played on a board which is known as Chaupar and the dice is known as Pasha. In the modern times, this game is known by the name of Jua and it is a taboo to play Jua in many families during the Diwali time.

In most states of India, Jua and all sorts of activities related to gambling are banned. But, many families play the same for religious purposes.

If stories were to be believed, it is said that the game of dice was invented by Lord Shiva and was first played between him and Goddess Parvati.

As per Hindu Mythology, it was a day of Kartik Pratipada, when Lord Shiva and Goddess Parvati played the game of dice for the first time.

During that moment it was stated by Lord Shiva, Oh Devi! The game of dice is created by me for those who want to play it for fun and for those as well who want to become wealthy by taking another's wealth.

Celebrate Diwali Celebration along with Govardhan Puja with utmost enthusiasm.