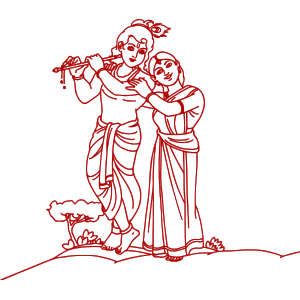 Radha Kund is situated in the North West segment of Vraja (near Vrindavana). The Gaudiya Vaishnavas recognize this Kunda as the lake of Radharani. It is considered one of the most auspicious and sacred places. 3

Devotees take a holy bath in the sacred Radha Kund on the fortunate day of Ahoi Ashtami as it is considered as highly auspicious.

The married couples who do not have a child seek the divine blessings of Radharani. The day for Radha Kund Snan is observed on Ashtami in the month of Kartik during the Krishna Paksha. As per the Hindu mythology, it is believed that by taking a bath or dip in the Radha Kund on the eve of Ahoi Ashtami, the couples get blessed with a child. Therefore, hundreds of couples visit Radha Kund and take a holy dip in it, which is popularly known as Radha Kund Snan.

The most auspicious and appropriate time for performing the ritual is Nishita or midnight time. Thus, the ritual initiates at midnight and lasts until morning.

Radha Kund was created after Lord Krishna killed Aristasura who was a demon in the form of a bull. According to the Hindu beliefs, the bull is a symbol of religion as it belongs to the cow family. Therefore according to Radharani and the Gopis, Lord Krishna had committed a religious offense by killing the bull. Radha ji asked Krishna to purify himself by taking the holy baths in all the sacred rivers. So, in order to make Radharani happy, Lord Krishna brought waters from all the sacred places to a single spot.

Krishna hit the ground with his lotus feet and so the waters from all the sacred and holy rivers collected at that spot and since that time, the place is popularly known as Shyama Kunda. Seeing this, Radharani also created another Kund adjacent to the Shyama Kunda by digging the ground with her bangles. All the sacred water bodies requested Radha ji to allow them to enter the Kund created by her. Therefore, in this way Radha Kund was created. On the banks of Radha Kunda, a total of eight kunjas are also situated on the names of the eight principal Sakhis of Radha Rani.

Performing the ritual of Radha Kund Snan is auspicious and beneficial when it is performed on Ahoi Ashtami. The observers offer pumpkins, garlands, and Prasadam to sacred Radha Kund. During midnight, the devotees take a dip or bath in the Kund and then afterward take a bath in Shyama Kund.