Have you heard about Barsana Holi?

Complete with songs, dance and celebrations, the Barsana Holi celebrations is a sight in itself. People from all across the world come to witness one of its kind Holi during this time of the year.

A famous thumri in Awadhi is usually sung for Barsana Holi. It begins

Do you know what Barsana Holi is?

Have you heard about Holi, an Indian festival celebrated in the Spring of every year?

Holi is the festival of colours, joy and gusto!

Every year in the season of Spring, people gather around to huddle together and sprinkle colours over each other. Do you know why Barsana Holi is celebrated in India?

Barsana is the birthplace of Radha, the eternal love of Krishna, and Barsana is located almost 42 kilometres from Mathura. Every region in India celebrates Holi in a unique way. In this article, we would tell you a lot about the Barsana Holi. Holi falls on 09th March to 10th of March this year. Barsana Holi dates begin one week before Holi.

Thus, as per the Barsana Holi traditions, men from Nandgram come to Barsana every year to raise the flag above Shri Radhikaji’s temple during this time of the year. The festival of colours begins almost seven days before the actual day of Holi here in Barsana.

Holi in Barsana is also known as Lathmar Holi which means that Holi in which women hit men with sticks. 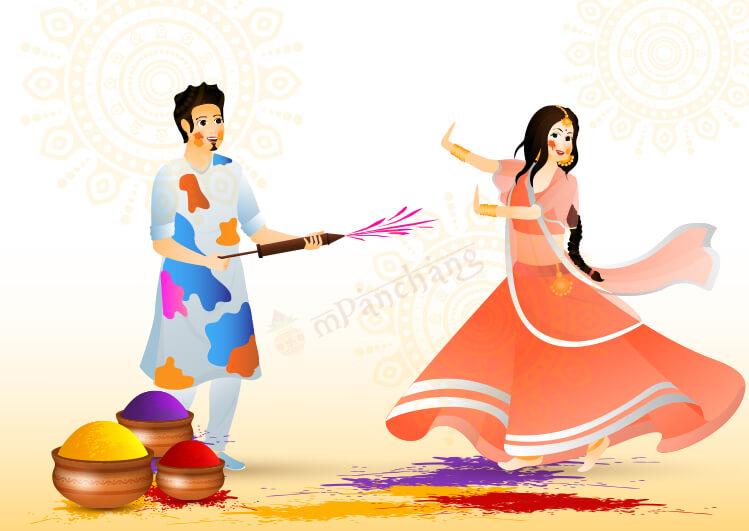 Why is Lathmar Holi celebrated?

Lathmar Holi is celebrated in this form due to a reason.

Krishna used to come down from Nandgram to Barsana and often used to play, tease and bully the Gopis (female friends) in Barsana. Taking offence, Radha and her friends one day caught him and his friends. They hit Kanha and his friends with sticks. Day after day, even after that day, when Kanha and his troops were continuously repeating such atrocities for a long time, Radha decided to teach them a lesson. So they planned to hit the whole group of boys with sticks and made men wear women’s clothes. Furthermore, they made the whole group dance before they were finally allowed to leave Barsana for Nandgram. This tale caught rage with the people of Barsana who have ever since then, been celebrating Holi in this form developing the Barsana Holi tradition around this legend.

Phalgun Purnima is the day on which the festival of Holi is celebrated.

What happens on this day in Barsana?

On the first day of Lathmar Holi, the men from Nandgram come dressed and fully padded. They wear protective gear to save themselves from the attack. Women line up and block their ways to the Radhikaji’s temple. The men are supposed to find a way to enter the temple and the women are supposed to stop their way. In this chaos, those poor men who get caught have to wear women’s attire and they have to dance to the tunes of the music and songs.

Holi Wishes You Can Send To Your Loved Ones.

The second day of Lathmar Holi, shepherds or men from Barsana go to Nandgram and play Holi with their women. On the second day of Lathmar Holi as well, women from Nandgram beat up the men from Barsana in the same way the Nandgram men get beaten. But, usually the Barsana men would drench the Barsana women with real Palash flower (Butea Monosperma) colours and Kesudo. Kesudo is the flower that is generally odourless but when you submerge it in water for almost a night, you get a saffron coloured liquid and the petals give a saffron pinch. Usually a coolant in the summer, these petals usually create a beautiful colour that is often used as a colorant in Holi.

Palash flowers are atypical of Jharkhand and Gujarat and are widely used in Barsana Holi celebrations. The petals are good for rashes and other forms of skin reactions.

Know about the Phulera Dooj - Celebrations and Significance.

The Radhikaji’s temple is the only temple dedicated to Radha in the whole of the country. Lathmar Holi is celebrated with great joy and often the proceedings are peaceful. However, the government of Uttar Pradesh ensures that the festival moves peacefully to its completion.

Thandai is served to all during the day of Lathmar Holi. Thandai is made up of almonds, fennel seeds, watermelon kernels, rose petals, pepper, cardamom, saffron, vetiver seeds, milk and sugar.

Why is Holi celebrated?

If we are discussing so much about Holi, then we must know the reasons why Holi became famous.

It is said that so enamoured was Emperor Akbar with the celebrations and joys of Holi that he declared it as a royal festival of Fatehpur Sikri.

Every place in India celebrates Holi but there are certain places that celebrate Holi very differently.

Braj Holi ranks next and is known as Mathkiphod Holi

Vrindavan Holi is also one of its kinds, known as the Flower Holi.

Huranga Holi is also one of its kinds, where women of that village beat up the men and often strip them up in front of a large group of audiences.