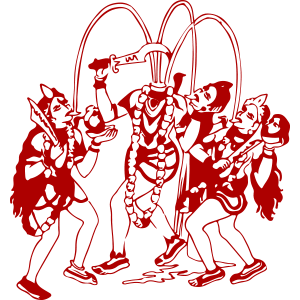 Who is Goddess Chhinnamasta?

Goddess Chhinnamasta is regarded as the 6th of the significant Dasa (ten) Mahavidyas (Goddesses of Wisdom). It is believed that Goddess Chhinnamasta beheaded herself in order to satisfy the hunger of her aides. The Goddess is also popular as Prachanda Chandika or Chinnamastika in many parts of the country.

When is Maa Chhinnamasta Jayanti?

What is The Significance of Chhinnamasta Jayanti?

What are The Rituals of Chhinnamasta Jayanti?

How Chhinnamasta Jayanti is Celebrated?

What is The Legend of Chinnamasta Jayanti?

As per the scriptures, it is believed that once Goddess Parvati was taking a bath in the river Mandakani assisted by 2 of her aides. But during this bath, Devi Parvati lost the actual count of time and thus after so much wait, her aides started feeling too hungry. Even after offering too many reminders, they were unable to fetch the attention of the deity.

When finally Goddess Parvati (Bhavani) realized the time, and in guilt beheaded herself. Three different bloodstreams erupted. From two bloodstreams her aides satisfied their hunger and the third one was consumed by the Goddess itself. Since that day, she was worshiped in the form of Chhinnamasta Devi.