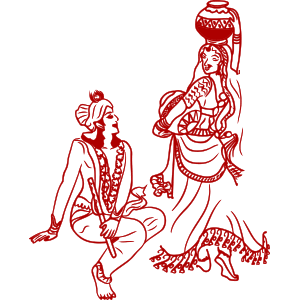 Radha Ashtami is a well-known Hindu festival which is celebrated to commemorate the birth of Shri Radha Rani. Radharani was revered as the consort of Lord Krishna. According to the Hindu beliefs, she is the incarnation or avatar of Goddess Lakshmi.

As per the Hindu calendar, the auspicious eve of Radha Ashtami is celebrated in the month of Bhadrapada, on the eighth day of the Shukla Paksha which is the Ashtami Tithi. The occasion of Radha Ashtami falls 15 days after the festival of Janmashtami, the birth anniversary of Lord Krishna. It usually takes place in the month of August or September according to the Gregorian calendar.

Radha Ashtami is also popular as Radhashtami or Radha Jayanti. On this particular day, the devotees worship Radharani with much enthusiasm and devotion. The day also signifies the selfless and admirable bond of love between Radha and Krishna, and their sacred association.

Why do we celebrate Radha Ashtami?

In all the temples of Lord Krishna particularly in the states of North India, special prayers and pujas take place on the eve of Radha Ashtami. The festival is observed with gaiety and grand celebrations in ISKCON temples as well as all over the country. The festival is celebrated with extreme magnificence and grandeur in Vrindavan, Mathura and in Barsana, the birthplace of Radharani.

Radhaji is believed to be the incarnation of Goddess Lakshmi. At the time of Janmashtami, she desired to accompany Lord Krishna and so she took birth on the earth in the form of Radha in order to represent her true devotion to Lord Krishna. Radharani is considered as the greatest example of immortal love and true devotion.

The love of Lord Krishna and Radha is regarded as the most soulful and pious love which has ever taken place between any two people. Both of them are considered as one soul and therefore Lord Krishna amalgamates in Radharani. The devotees who offer prayers and worship Radharani are bestowed with the blessings of Goddess Lakshmi and Lord Vishnu.

What is the story of Radha Ashtami?

There are two different stories which are associated with the birth of Radharani.

During the month of Bhadrapada and on a half-moon night, King Vrishbhanu came at the shore of Jamuna to take a bath. While taking a bath, he found himself being immersed in a golden aura, the spirit of true and pure love. It was radiating from a lotus. There was a baby girl on its whorl. King Vrishbhanu took the baby girl and returned to the palace. Queen Kirtida was extremely delighted by seeing the baby as they were childless so they adopted Radharani and started taking enough care of her.

The second story related to the birth of Radharani is that according to Padma Purana, Vrishbhanu was cleaning the floor to perform a yajna when he found Radharani. It was told to Vrishbhanu and his wife Kritika by Sage ‘Narada’ that Radha is the incarnation of Goddess Laxmi only. From that particular day, they both considered her as their daughter.

What are the rituals performed on Radha Ashtami?

On the eve of Radha Ashtami, devotees worship Radharani. People who want to seek blessings of Goddess Lakshmi also observe a fast for the day. During the noontime, the idol of Radha is placed after giving a holy bath and then decorated with flowers and new clothes. Bhog, dhoop, and shringar are offered to Radharani. Devotees perform Radha aarti and distribute prasad to all the devotees. On the festival of Radha Ashtami, chanting of Radha Gayatri Mantra is much popular.