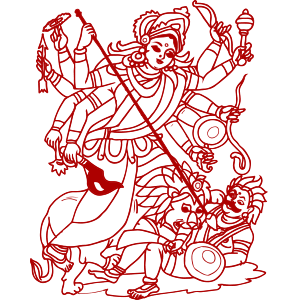 In India, the festival of Navratri holds deep religious significance. It is celebrated twice in a year - Chaitra Navratri which falls in the Hindu Month of Chaitra and Sharad Navratri in the Lunar month of Ashvin. Navmi Tithi (9th Day) of Navratri is considered as the most auspicious day among all the nine days of this festival. In Hindu Calendar, on Chaitra Navratri, this day is celebrated as Rama Navami while on Sharad Navratri, it is revered as Maha Navami.

Maha Navami is a religious festival dedicated to Maa Durga and her 9 avatars. People worship the different avatars of Durga in different parts of India. Essentially on this day, the Mahisasurmardini, i.e. one who killed the buffalo demon, the form of Durga is worshipped. As the legend has it, on this auspicious day of Maha Navami, the Goddess killed the evil Mahisasur. Navami is the day to laud the victory of good over evil.

Devotees worship Goddess Durga ardently and pray for the protection of their family from all the obstacles and difficulties in life. It is believed that Goddess Durga empowers her devotees to fulfill all their ambitions and attain success. Maha Navami is also considered as an auspicious day to start something new.

Navratri is also referred to as the festival of dance as it is the time of the year when people indulge themselves in music and dance for nine long days. Every region has its own way of celebrating this colorful festival.

Performing Maha Navami Puja holds immense reverence as this Puja is equivalent to every Puja that is done in the last 9 days.

In Northern India, Maha Navami Puja is done through Kanya Pujan. On this day, 9 young girls are invited over for Puja and worshipped as 9 different forms of Goddess Durga. Their feet are washed and their aarti is performed using incense sticks followed by applying Kumkum on their forehead. Then, these 9 girls are offered food and other gifts and goodies.

In Southern India, especially in Tamil Nadu, Kerala and Karnataka, this day is dedicated to Goddess Saraswati. Ayudh Puja or Shastra Puja is performed on this day paying respect to all the tools of knowledge and wisdom. Traditionally, weapons were worshipped during this Puja but now equipments such as musical instruments, books as well as vehicles are worshipped on Navami Tithi. There is a tradition of smashing a white pumpkin in front of the vehicle at the time of Puja to eliminate evils of any sort.

In Western India, Navratri celebrations are witnessed on a grand scale in Gujarat. People fast on significant days or even for all the nine days in remembrance of Goddess Durga and her nine forms. A clay pot, known as Garbo, is created which represents the womb of the universe and it is lit up which is symbolic of one's soul. This clay pot is lighted till 9 days. The significance of this pot is portrayed through dance which is quite popular and is known as Garba.

Another extremely popular observance on Navami tithi is the Bhattukamma Festival of Andhra Pradesh, It is a celebration of womanhood and its beauty. This festival is dedicated to a beautiful flower. Women don beautiful clothes and jewelry on this day and offer their prayers to Gauri - an avatar of Durga.

Navmi Homa is an integral part of Maha Navami Puja. It is performed on Navami Tithi during Durga Puja and it is advisable to perform it during the day. Also known as Chandi Homa, this ritual is observed to seek the blessings of Goddess Durga for a happy and prosperous life. People performing this Homa chant 700 verses from Durga Saptashati.