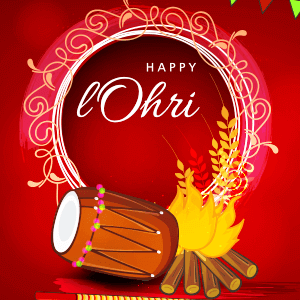 What is Lohri Festival?

The occasion of Lohri is celebrated majorly by Hindus as well as people of Sikh communities. A sacred and holy bonfire marks the start of Lohri celebrations which also denotes the ending of the winter solstice. It signifies the end of the chilly and long nights of winter and marks the start of more lengthy and warmer days of summer. It also marks the beginning of the Northway journey of Sun.

Why Do We Celebrate Lohri?

Lohri is the festive time to harvest the Rabi crop. It is the time when people pay their gratitude and thanks to Lord Sun for his gracious blessings in helping them to have a good harvest.

When Do We Celebrate Lohri?

As per the Hindu calendar, the celebrations of Lohri is done in Paush month and according to the Gregorian calendar it falls on January 13th of every calendar year. The day is celebrated a day prior to the occasion of Makar Sankranti. It takes place on a similar day when ‘Pongal’ and 'Bhogali Bihu' are celebrated in the regions of Tamil Nadu and Assam respectively.

How Lohri is Celebrated?

The celebrations of the divine festival of Lohri is featured by the lighting of the sacred fire which is considered as highly divine and holy ritual denoting the presence and blessings of Lord Agni. Huge gatherings are formed around the holy bonfire where people worship and offer prayers and also throw sacred food (peanuts, jaggery, popcorn, sesame seeds, etc.) into the fire. The festivity carries on with alluring bhangra dance and singing of devotional songs which makes the entire celebrations captivating and joyous. People come up in traditional Lohri dress adorned with eye-catching Punjabi embroidery done in silk and gold thread and decorated with mirror work. In the royal feast, people enjoy the authentic Lohri food which is usually traditional and vegetarian only.

What is The Significance of Lohri?

Apart from any specific religious significance, there is a prominent social significance which is associated with the festival of Lohri. It is a day when the feelings of social belongingness and love is imparted to all members of the community. It is a day when people are relieved from their day to day chores and enjoy the happy times and togetherness with family and friends. On this particular day, everyone becomes a part of the social gathering, and the social gap is bridged People visit each other’s places to exchange greetings and share the happiness together.

Other than this, the festival also possesses special significance related to harvest and fertility. India is well known as an agrarian nation and Punjab is one of the most lucrative states when it comes to producing food grains, and so there is a huge significance of harvesting and the Lohri festival. Therefore, the occasion of Lohri symbolizes harvesting, fertility, the ripening of the crops, culture, heritage, and sense of togetherness.

Also See: Makar Sankranti Wishes You Can Send To Your Loved Ones

As per the Lohri rituals, there is a custom of offering sesame ladoo, roasted peanuts, revri, dry fruits, and other sweets and food to the newborn or the newly wedded bride on their first Lohri. The new bride on her first Lohri apply Mehendi, wear new and traditional clothes and beautifully adorn herself with jewelry and bangles (Punjabi Chura). It is somewhat like a Sindhara or Sinjara festival celebrated in Rajasthan. In respect with the first Lohri of a newborn, the mother sits with the child in her lap and all the invitees offer their wishes and gifts to the newborn.

What is The History of Lohri festival?

The celebration of this festival dates back to ancient times. There are several Lohri legends and stories related to the origin of the Lohri festival, out of which the most common and famous is the Lohri legend of Dulla Bhatti.

Dulla Bhatti was extremely famous among the poor people during the ruling of Akbar, the Mughal King. He was popular for plundering the rich people and communities and then distributing them fairly among the individuals who were needy and poor. He gained huge popularity for all his doings. Later to this, once Dulla Bhatti saved a girl from kidnappers and then started taking care of the girl just like his own child. Hence, the celebrations of Lohri festival in the praise of Dulla Bhatti.

To experience the true fervor of Lohri festival, one must visit the regions of Punjab during the time of this remarkable festivity… Happy Lohri to all !!