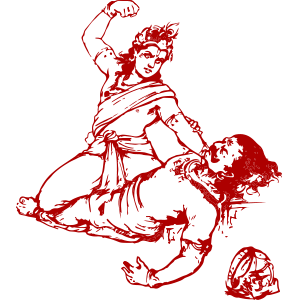 The celebration of the victory of good over evil signifies the festivity of Kansa Vadh. On this particular day, Lord Krishna reinstated ‘King Ugrasena as the primary Ruler of India by killing ‘Kansa’. As per the Hindu calendar, this festival is observed on the tenth day (Dashami tithi) in the Kartik month during Shukla Paksha. According to the Gregorian calendar, the occasion is observed in the month of November.

As per the Hindu scriptures and mythology, Kansa was recognized as an evil ruler in the regions of Mathura. Lord Vishnu in his eighth incarnation of Lord Krishna killed Kansa and released his parents and grandfather from the rule and prison of Kansa. The festival of ‘Kansa Vadha’ marks the end of evil and restoration of goodness in the universe and is celebrated as the win of Dharma over Adharma. In the states of Uttar Pradesh and in Mathura, the day is celebrated with immense vigor and enthusiasm.

What are the Rituals of Kansa Vadh?

What is the Story of Kansa Vadh?

For the devotees of Lord Krishna, the occasion of Kansa Vadh possess religious as well as moral importance. The day commemorates the win of good over evil. As per the beliefs, Kansa had done numerous evil deeds and several Adharma during the time of his ruling period. Above all,. When the evil king came to know that he was destined to be killed by the 8th son of Devaki, he imprisoned his sister along with her husband as well as killed all their children.

But in spite of all the evil deeds and efforts of Kansa, Lord Krishna, the 8th son of Devaki survived and was brought up by Yashoda and Nanda in Vrindavan. When Kansa got to know about the same, he made several attempts to kill the deity but all went in vain. Then, after the last attempt of Kansa, Lord Krishna killed him as the avatar of Lord Vishnu and released his grandfather and parents. It was the end to all the evil deeds and King Ugrasen was reinstated as the King of Mathura. Since that time, the day is celebrated as ‘Kansa Vadh’ as a symbol of the existence of goodness and removal of evil from the world.