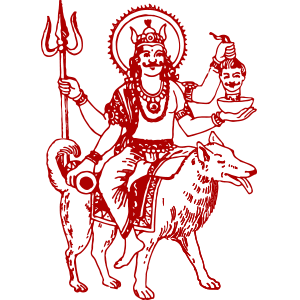 Kalabhairav Jayanti is observed on the Ashtami Tithi of the Krishna Paksha during the Hindu month of Kartika.

Who is Kaal Bhairav?

Kalabhairav Jayanti possesses immense significance and importance for the followers of Lord Kala Bhairav and Lord Shiva. Lord Kalabhairava is considered as the fearful incarnation of Lord Shiva. As per the scriptures and Hindu Mythology, at the instance when Lord Mahesh, Lord Vishnu, and Lord Brahma were having a discussion regarding their supremacy and power, Lord Shiva got furious due to some remarks passed by the deity Brahma. As a result, Lord Kalabhairava appeared from the forehead of Lord Shiva and in anger severed one head out of the five heads of Lord Brahma.

Lord Kalabhairava rides on a dog and also holds a rod in order to punish the one who performs sinful acts. The devotees worship and offer prayers to Lord Kalabhairava on the auspicious eve of Kalabhairav Jayanti to get bestowed with success and good health as well as to get rid of all the past and present sins. It is also believed that, by worshipping Lord Kalabhairava, the devotees eliminate all their ‘Shani’ and ‘Rahu’ doshas.