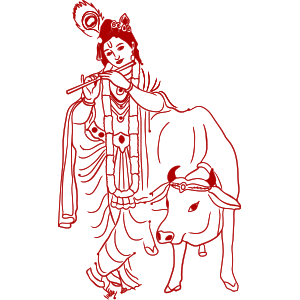 Gopashtami is celebrated on the eighth day in the month of Kartik during the Shukla Paksha. It is a festival dedicated to worship and offer prayers to the cows. On this day, the individuals pay tribute to cow wealth (Godhan) and also show gratitude and respect to the cows which are regarded as the life giver. In Hindu culture, cows are called as ‘Gau Mata’ and are worshipped like the Goddess. The ritual of offering prayers and worshipping the calves and cows is similar to the festival of Govatsa Dwadashi which is celebrated in the regions of Maharashtra.

What is the significance of Gopashtami?

Cows are regarded as the soul of Hindu religion and culture. They are considered as pure and are also worshipped like Hindu deities. As per the Hindu mythology, it is believed that the several deities, goddesses, and gods reside inside a cow and therefore they possess a special place in the Hindu religion. They are believed to be the owner of spiritual and divine qualities and are another form of Goddess Earth. As per the Hindu beliefs, the individuals who worship cow on the eve of Gopashtami are blessed with a happy life and good fortune. It also helps the devotees in realizing their desires.

What is the story of Gopashtami?

There are several stories which are associated with the celebration of Gopashtami. As per the Hindu scriptures, cows are considered as dearest to Lord Krishna. As per the beliefs, Gopashtami was the specific day when Nand Maharaj sent Lord Krishna and Lord Balaram for the very first time to herd the cows as they both entered into the Pauganda age i.e age between 6 to 10 years. And thus, from this particular day, they both were in charge to herd the cows.

As per the legends, it is believed that Lord Indra because of his ego wanted to showcase his prowess to all the Vrindavan people. So, he decided to flood the entire region of Brij so that the people bow in front of the deity and therefore it resulted in seven day long torrential rains.

Lord Krishna realized that the region and the people are in danger, so to save them he lifted the Govardhan Parvat on his little finger to offer shelter to all the beings. On the eighth day, Lord Indra realized his mistake and the rains stopped. He sought forgiveness from Lord Krishna. Surbhi cow showered milk on Lord Indra and Lord Krishna and declared Lord Krishna as Govinda who is meant to be the Lord of cows. Though it was the eighth day which is called as Ashtami, that particular day is celebrated as Gopashtami.

What are the rituals and celebration of Gopashtami?